Last week I was honored to be a guest on Search for Uhuru radio show.LIN Land Infrastructure and Nationhood as a concept is finally taking off.No other ideology will work.Infrastructure is about power.Who controls what we see, where we go,the quality of life,our protection,comfort and vitality.Infrastructure and the perfection of infrastructure is 90% of what all governments and policy makers do.The Black race has little or poor infrastructure.In order for you to have infrastructure you need land.A base of operations that you control.On that land building infrastructure and maintaining and expanding and controlling that infrastructure allows for a people to become a community locally and a nation nationally.Poor infrastructure leads to the disfunction of the state.It creates breeches and vulnerabilities.Because we do not live under a common land and infrastructure there is no community.There is no we,there is no us.I stress that we should have a Afrikstan or Afrikan homeland to build this infrastructure so we can have a global pipeline linking Black America to Africa and beyond.This in one generation will solve 80% of the problems we face.So we at the BAIO need people with skills who are ready to build.It wont be easy.As I said in the broadcast there will be challenges,trials and tribulations.Out of which a new nation and civilization will emerge.

Many Black people in America do not have a clue about why they feel oppressed or still subjugated by a system of White domination in America and the globe.The answer to this is one word...INFRASTRUCTURE.The Chinese,Japanese,Europeans,and most people have it and the Black race does not.Before I continue I will let you in on a secret.Africa is lacking infrastructure.This means it does not have the capacity to solve basic problems and challenges that should be easy in the modern world.Infrastructure requires still in the age of globalism states with competent governments and bureaucracies that maintain these systems.The more a country advances the more efficient its infrastructure develops.

In Ancient times...Infrastructure meant the difference between being an empire and a power or being conquered and enslaved.All of the great civilizations had well developed trading post,roads,security,storage,communications,laws and treaties.The annexation of territory also meant the control over the infrastructure of the annexed land.Such control meant the people were dependent on the imperial force for the basic things of life.Infrastructure suffered when wars happened or people were forced to uproot.

The Modern Republic...Sought to end the problems of infrastructure by defining a nation to a specific territorial boundary called a state.Inside that state a government of the people would solve the problems of water,sewage,roads,postal,taxes,communications,laws,police,schools ect.The republic also protected its overseas holdings through treaties and diplomacy with other governments.Modern navies were created to protect the maritime infrastructure of Western Nations during the mercantile era.Ships sailed in synchronized order with a manifest backed up by laws of the high seas and prospective governments.Infrastructure also allows for banking and transfer of payments without hassle through a systematic process.This led to the Industrial Revolution in the 18th century and early 19th century.Through infrastructure modern nation states were built.

:the underlying foundation or basic framework (as of a system or organization)
:the permanent installations required for military purposes
:the system of public works of a country, state, or region
:the resources (as personnel, buildings, or equipment) required for an activity

When I opened with the statement that there is no real Black infrastructure on Earth this is what I am saying.Infrastructure allows a state to be totally self sustaining without the help of another country.A state should be able to enforce its own laws and meet out justice in its own courts.A state should be able to feed its own population or trade in equal value food for goods produced in that state.Japan does not grow all of its food but it has a highly developed industrial capacity.It does not produce raw materials but its economy is structured around trade and export.It processes raw materials into finished capital goods to trade for things it needs such as oil,wood,wheat,cotton.Without a government and a system in place its economy would collapse.Nigeria has oil,it has forest,it has gold,it has the richest fishing grounds off its coast but it does not refine oil to gasoline.Nor does it produce enough fish or rice for its huge domestic market.Why is this?For one the railways,roads and electrical grid is in poor condition.Corrupt governments spend the money meant on infrastructure lavishly and projects get abandoned half way.This is the case throughout Africa.Part of having infrastructure is to maintain it.Poor infrastructure cost Africa 200 billion a year in lost productivity.Poor infrastructure is the reason that so  many young Africans  are risking the high seas to get to Europe and Asia.

The Black Afrikan Infrastructure Organization is a geopolitical advocacy group.Our priority is capacity building by developing the African continent using the best minds of the African diaspora in partnership with host African states.We see a solution to our chronic problems in America by developing Africa.Our focus is on STEM.Along with modern business,industry.IT and cooperation across the Atlantic.

The whole basis for the Black Afrikan Infrastructure Organization LIN Land Infrastructure and Nationhood.On a micro scale you need land infrastructure and then you have a community,town,city,village.Ours is on a much grander scale.This blog is an attempt visualize the components of each pillar.

Land......Is the negotiating of territory on the African continent with a willing host African nation.Such land only needs between 3000-40,000 square miles of undeveloped land.

The Nation State will function as a safe haven for people of African descent wishing to build a free society of their own. 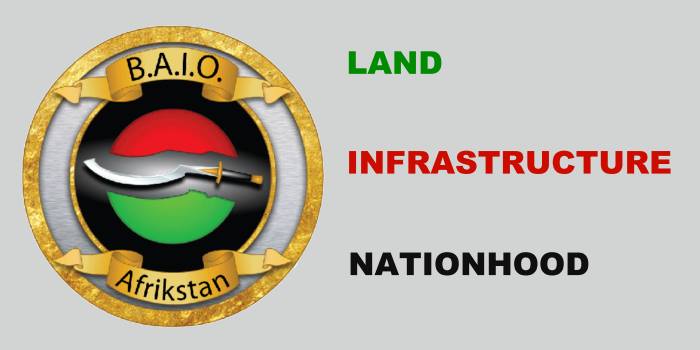 The Million Man March anniversary which took place on October 10 2015,was another waste of a golden opportunity.It is becoming clear that there really isn't any real nationalist movement anymore.There never was.We have entertainers,fools,clowns,losers,angry winers ect.There are no Honorable men in Black America,not one.It seems everyone is out for their own agenda,money,women,fame and fortune.What I noticed was that I had it all wrong,Black people are not looking for salvation.They are just looking for a way to justify their miserable third class existence in America.As long as they believe the problem is with the so called WHITE MAN.They can use this straw man argument to point to all of their shortcomings.Is it any wonder why White America has not fear of us?Justice or Else?The or else came and he took boat loads of money this past weekend from gullible Negroes.The city of DC got a surge of business and cash from the thousands of Negroes and their"or else'.

It is time for the BAIO to take the reigns of leadership to guide our people to the promised land.LIN Land Infrastructure and Nationhood is the answer,if anyone is searching with the right questions.It seems Minister Farrakhan has gone over the the LGBT cause.This cause is against the Black traditional family.An institution that is vital to nation building.Notice it was the worst entertainers that promote the self destructive culture that was present in the march?Note the lesbian MGT of the Nation of Islam.Our community is finally waking up to the garbage that report to speak for us. The Black Afrikan Infrastructure Group is based on a few core principles.The most important of them, or the foundation that,enables all others are three things.LIN........LAND INFRASTRUCTURE AND NATIONHOOD............Land is the main goal of BAIO.Without land we can never really be a real people.Without land your beliefs,religions,values,desires,ideologies are void.It is land that produces wealth.It is land that produces a people,culture,traditions,language,kinship.We must have a land of our own, on African soil.

Nationhood........the nation means the people.Nation defines who we are.Nation means a common origin,heritage,future.Self determination of a people.All people have a right to define themselves as a nation.We at BAIO declare that African Americans primarily and anyone of African descent in the diaspora being victims of the horrible Trans Atlantic Slave trade to be a nation in captivity.We proclaim our right to our own soil.